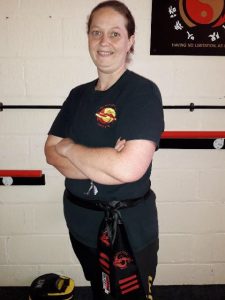 Vikki became a member of the club at a very young age, in September 1994.  She trained regularly, moving up the grades eventually passing her 1st Degree Black sash. During her teens Vikki left to pursue a career before returning to the club in early 2014 and passing her 2nd Degree in August 2015 and 3rd in August 2017  Vikki now assists in teaching other members.